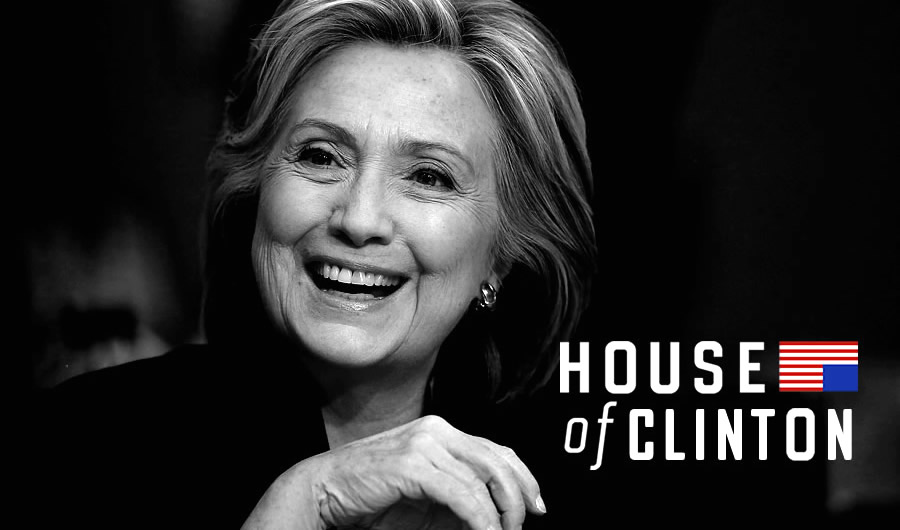 Is House of Cards Based on Hillary Clinton Political Scandals?

Hillary Clinton has survived the Bernie Sanders socialist uprising and has become the first female presidential nominee of a major party. Her rise to power has many wondering if she might be a character out of the Netflix hit political drama House of Cards. The scandals, investigations, and rumors of corruption read like the script of a political thriller. The eerie similarities between the Clintons and the House of Cards story provide insight into how the Clintons operate and what America might expect from another Clinton administration in 2017.

House of Cards is a heavy political drama that follows a Congressman from South Carolina, his cunning and accomplished wife, and their rise to the presidency. Frank Underwood and his wife Claire Underwood, are united in their clever plans and moral flexibility to do whatever it takes to get what they want. (Warning: HOC spoilers ahead.)

William Jefferson Clinton and Hillary Rodham Clinton rose to power from Bill’s election as Governor of Arkansas to his two terms as President of the United States. Hillary Clinton used her position as First Lady to launch her own political career as a New York Senator, Secretary of State, and two-time presidential candidate.

The Clintons’ and the Underwoods’ stories are intertwined with mirroring experiences that involve scandals, suicides, affairs, media influence, and political intrigue.

The Underwoods use reporters to plant stories and manipulate the media to advance their devious plans. Congressman Underwood used his former chief of staff and personally selected reporters to help control the media message.

The Clintons have a long history of using their former staff to help them in their plan to get back into the White House. Here are a few of the Clintons’ close confidants who are directly involved in the media:

Clinton’s relationship with the media has strained ties dating back to her 2008 run against Barack Obama. The media favored her opponent and her loss gave her seven years to craft her media plan and script her message to voters. During the primary season, reporters complained about her lack of press availability as she refused to answer any questions and limited her exposure.

This suppression of public scrutiny and free press was put on display when her campaign made the demanded to Trump, “Delete your account.”  While it was an attempt to be clever and burn Trump’s Twitter usage, it was a disregard for freedom of speech and set a dangerous precedent for callously trampling constitutional rights.

In House of Cards, Doug Stamper serves as the Underwoods’ chief of staff and fixer. Stamper’s shadowy job involves solving delicate problems with “creative” solutions. He is a principal player in covering up the Underwoods’ secrets and illegal activity.

The obvious Doug Stamper match for the Clintons would be Sidney Blumenthal, a former assistant and senior adviser to President Clinton. Mr. Blumenthal was discussed at length during the Benghazi hearings as his emails to Hillary’s private email server exposed unusual and close communications during her time as Secretary of State. Blumenthal was disliked by Obama administration senior staff.  When Hillary became Secretary of State, Obama’s Chief of Staff refused to allow Hillary to hire her friend Sidney at the State Department. Blumenthal was reportedly paid $10,000 a month to continue working for Hillary through the Clinton Foundation.

Huma Abedin, Hillary’s close confidant and advisor may currently fill Doug Stamper’s role in the Clintons’ real-life version of House of Cards. Huma’s husband, the former New York Congressman Anthony Weiner, was involved in a sexting scandal that has quietly disappeared in the media.

Another possible Stamper stand-in could be Vernon Jordan. According to the New York Times, “Along with his friend the President, he stands center stage in the political and legal drama over alleged sexual misconduct by Mr. Clinton, accused of having tried to cover up a Presidential affair with a young intern.” Vernon Jordan has reportedly been accused of helping Monica Lewinsky land another job to get her out of the White House after her internship led to an affair with President Bill Clinton.

The Clintons are experts on avoiding consequences of alleged scandals, just like the Underwoods. Troopergate, Watergate, Hillary’s private email habit, Benghazi, and even the multiple accusations of sexual misconduct leveled against Bill Clinton have all failed to bring down the Clinton power couple.

The Clintons are smart and careful campaigners. Leaving nothing to chance, Hillary may be planning how the Presidential debates are handled. Their former Press Secretary, Mike McCurry, is co-chair of the Commission on Presidential Debates. This commission sponsors and produces the presidential and vice-presidential debate. The commission is also responsible for research and educational activities related to the debates.

Update: 10/31/16: The FBI reopens the case against Hillary Clinton and her potentially illegal handling of classified information. While investigating former disgraced congressmen Anthony Weiner (one could easily see a Congressman Russo comparison here – hopefully, there is no tragic suicide here) for allegedly sexting an underage girl, the FBI discovered potential bombshell emails on a shared laptop used by Huma Abedin. This revelation has rocked the Clinton campaign and sent her poll numbers spiraling down.

The constant flow of Wikileaks emails from Clinton campaign chairman John Podesta is showing the inner workings of her campaign and Hillary’s contempt for American voters. The latest email leaks show how the current interim head of the DNC sent debate questions to Hillary’s team before the debates, a very bad form of cheating.

In the first season of House of Cards, Congressmen Frank Underwood gets passed over for the job of Secretary of State. This leads him down a path of revenge, eventually replacing the Vice President and orchestrating a conspiracy to take the presidency. In the Underwoods’ quest for power, they use a reporter and a junior Congressman to manipulate the political landscape. They befriend the Congressman only to assist in setting up his “suicide” to avoid getting caught in their unlawful schemes.

Vince Foster was the deputy of the White House Counsel and an old friend of the Clintons who also served as the Clinton’s’ legal defense. His body was found dead in Fort Marcy Park outside of the nation’s capital. His death has spawned numerous theories as to the suspicious nature and timing of his demise. The FBI, Department of Justice, and even an independent special counsel led by Kenneth Starr investigated. The official ruling of the death was suicide, just like Pennsylvania’s Congressman Peter “Pete” Russo and Reporter Zoe Barnes from House of Cards.

New theories are surrounding DNC staffer Seth Rich’s suspicious death as WikiLeaks offered a $20,000 reward for information on his murder.

In the fourth season of House of Cards, there is a direct parallel to the 2016 presidential primary elections. The Underwoods’ republican competitor has a connection to a powerful search engine that may help him win the election using powerful data. A  search engine called PollyHop was used in the show as a stand-in for Google and was implied to be sharing user data with the fictional republican candidate. This may be the most interesting correlation between the fictional story and reality.

Privacy concerns are the driving headlines as Edward Snowden’s NSA leaks, the FBI terrorist iPhone hacking, and civilian communication monitoring continue to make the news. The idea that a search engine used in the daily lives of all Americans would share data with a presidential candidate should create waves of outrage.

Eric Schmidt, the former CEO of Google and chairman of its parent company Alphabet, is a major backer of Hillary. Schmidt has reportedly funded a very secretive startup call ‘The Groundwork” and two other data analytics companies run by former Obama campaign data advisors.

According to the story by Quartz, “the Groundwork has been tasked with building the technological infrastructure to ingest massive amounts of information about voters, and develop tools that will help the campaign target them for fundraising, advertising, outreach, and get-out-the-vote efforts..”

Quartz also reported that “The Groundwork is one of the Clinton campaign’s biggest vendors, billing it for more than $177,000 in the second quarter of 2015, according to federal filings.”

It is also important to note that former Google executive Stephanie Hannon is the Hillary Clinton campaign’s chief technology officer. Wired also wrote a feature explaining the effects Google’s algorithm could have on an electoral outcome.

In 2014 Wikileaks founder Julian Assange wrote a warning about the possibility of Google’s involvement in the 2016 election after meeting with Google executives.

SourceFed recently documented Google’s search manipulation for Hillary. While Google denies these claims, search engine experts may argue that suggested search manipulation was done by third parties. Their work could influence the results to display search queries that favor Clinton.

Lord Dobbs, the creator of House of Cards, told Buzzfeed which candidate he thinks is most closely aligned with his fictional characters.

“Hillary [Clinton],” Dobbs says after a moment’s thought. “She is a political figure in her own right – behind the scenes, but now increasingly in front of the scenes. That is much more of a Claire character than, for instance, Cherie [Blair], who as far as I’m aware didn’t become actively aware in politics as such.”

“I’m fascinated by Hillary of course because she comes with so much baggage,” he tells BuzzFeed News, sitting on a bench outside parliament, dressed in a crisp white shirt and cufflinks. “That baggage is her strength but also her vulnerability. We just have to wait and see where the balance lies on that. Though it is bizarre that the system that was bred out of [rejection of a King] has produced the Bushes, the Kennedys, the Clintons, the Roosevelts….”

If House of Cards is partly based on the Clintons, this might explain why the one person to beat both the Underwoods and the Clintons is someone named Hammerschmidt.

In House of Cards, Tom Hammerschmidt is the stalwart newspaper editor who finally exposes the whole story of the Underwood corruption in print.

The real-life John Paul Hammerschmidt, a Republican Congressman from Arkansas defeated Bill Clinton in 1974 in a close election. Hammerschmidt was attacked by Clinton for standing by Nixon in the wake of the Watergate scandal. Bill lost to Hammerschmidt by only a few thousand votes. Were the lessons from this narrow loss the catalyst for Clinton’s sharpening of political tactics?

It may not be just a coincidence that the real John Paul Hammerschmidt got his education at The Citadel in South Carolina, the same school Frank Underwood attended.

The Underwoods are the lying, scheming politicians America loves to hate.

With Hillary Clinton’s remarkably high unfavorability ratings, she may ride America’s fascination with political villains all the way to the Oval Office. If this is all part of the Clinton’s’ plan to retake the White House, they may be taking a page right out the Underwoods’ playbook.

UPDATE 11/8/16: Donald Trump won the Election. It seems that America prefers the fictional corruption of House of Cards over real corruption. Wall Street is freaking out after realizing they will not get the play they paid for.

Update 8/12/19: Jeffrey Epstein, a close confidant of the Clintons and accused child sex trafficer was found hanging in his jail cell after case files started to go public. Many speculated he had dirt on many powerful people including the Clintons.